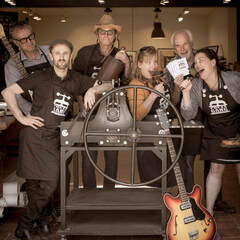 Press Gang performing at Baldessin Press Printmakers' Picnic, 2:00pm Sunday 24 November 2019
Once again, that talented band of printmakers, will be performing at the Baldessin Press Printmakers'  Picnic in the idyllic surrounds at St Andrews. Led by Martin King and featuring an array of luminaries of the Melbourne printmaking world, the Press Gang perform classic hits with original printmaking lyrics, written by yours truly. Come join us for a celebration of all things printmaking. Big thank you to the talented Silvi Glattauer  for the fab photo; 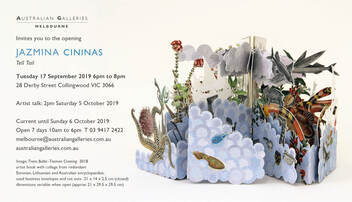 Tell Tail. Solo exhibition at Australian Galleries. 17 September - 6 October 2019
My forthcoming exhibition shines a spotlight on my recent forays into the world of artist books. Come along to see new narratives constructed from old book illustrations, recycled business envelopes and Estonian milk cartons. The books will be sharing the walls with my trusty girlie werewolf linocut portraits. Officially opening on the 17th September, but the show is up and running for those who like to get in early. There will also be an Artist Talk at 2pm Saturday 5 October. 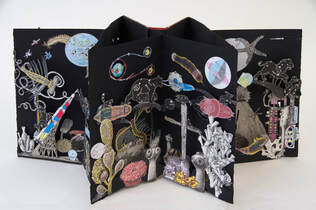 ​Threshold: 2019 Banyule Works on Paper Award. 2nd Commendation Prize. 29 August - 19 October 2019
I'm thrilled my little artist book, Gone Star Fishing, has been awarded the 2nd Commendation Prize at this year's Banyule Works on Paper Award, from an absolutely stellar line up of artists. This year's theme, Threshold, invited artists to submit artworks that express, explore,,advocate, or address current social, cultural, political or environmental issues.Be sure to cross the threshold of Hatch Contemporary Art Space for a peek if you happen to be passing through Ivanhoe. 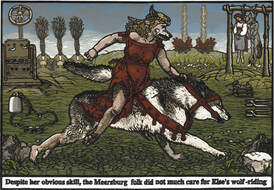 Of Humans and Wolves. Curated group exhibition at MARKK Museum am Rothenbaum, Hamburg. 11 April - 13 October 2019
Else of Meersburg is now Else of Hamburg! I'm thrilled that Else is not only featured in the Of Humans and Wolves exhibition - which takes a cross-cultural and historical approach to explore how the relations between human and wolf have been perceived and represented in popular culture, in the arts, and the sciences - she has also taken up permanent residence in this prestigious ethnographic museum as part of their collection. Go Else! 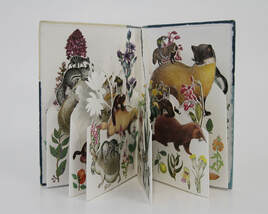 Image and Text, in conjunction with the Mildura Writers' Festival. The Art Vault.
​17 July - 5 August 2019
The Art Vault have been long time supporters of the Mildura Writers' Festival, and this year are contributing an exhibition of artists' books and artworks exploring text. I'm delighted to have been selected to take part in this creative reimagining of the book and the word. The Art Vault is a hidden gem, and always worth a visit should you be passing through the sun soaked citrus groves of Mildura. 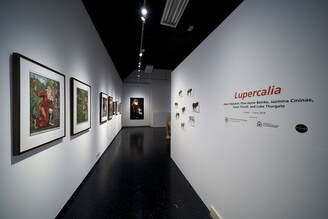 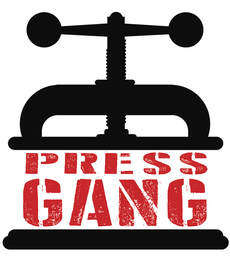 ​​Press Gang performing at Australian Galleries, 6:00pm Tuesday 26 February 2019
When I'm not making reduction linocuts of female werewolves or collaging and binding artist books or making lager phones and performing with the Lithuanian folk group, The Lost Clog, you will finding me writing original lyrics and performing with those talented band of printmakers, the Press Gang. Led by Martin King and featuring an array of luminaries of the Melbourne printmaking world. We're tickled pink to have been asked to perform at the opening of the Papermade exhibition at Australian Galleries. Featuring a stellar lineup of Australian Galleries' finest printmaking talents. Curated by Kathleen Coelho. 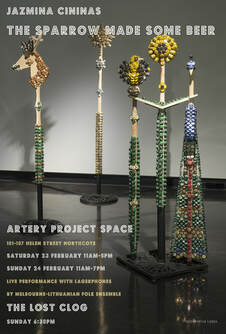 ​​The Sparrow Made Some Beer. 23-24 February 2019
I've had this little project on my back-burner for a number of years. My fantasy of a lagerphone forest activated by a live performance is finally seeing the light of day. Two days only, literally finishing up with a bang on Sunday 24 February with a live performance by The Lost Clog. Thank you Lost Clog! And thank you to the the fabulous Artery Co-Operative for your invaluable support, facilities and vision. Facebook event details here: https://www.facebook.com/events/2542787722459636/. 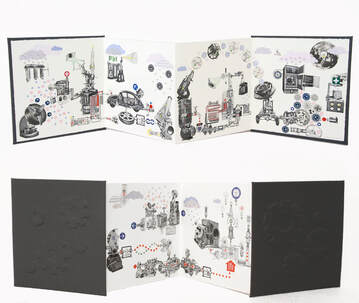 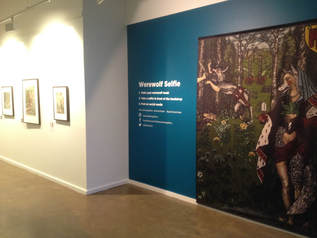 Featuring a selection of works from my PhD project and beyond, plus new, specially created interactive elements including a backdrop and werewolf kits for werewolf selfies. Thank you Benalla Art Gallery!
​ 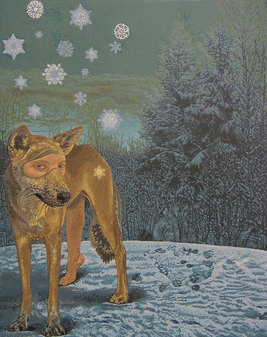 Group exhibition of printmakers who explore the idea of the wilderness in their work. Featuring David Frazer, Annika Romeyn Bec Orszag and Sophia Szilagyi and yours truly. 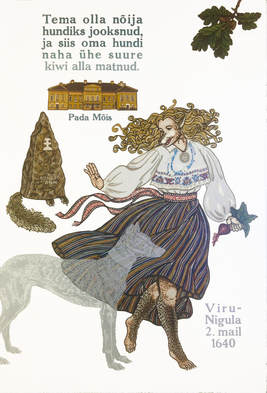 The culmination of a three month residency at the fabulous Estonian Printing Museum in Tartu. The exhibition includes pre-existing linocuts and  new works made in response to the country's unusually rich legacy of female werewolves, including a reduction linocut portrait of Kongla Ann from Viru Nigula, and an artist book featuring collages from the museum's .stockpile of discarded Soviet-era  encyclopaedias.

​
1 September - 30 November 2017: International Residency
Tartu Artist in Residence (TAiR) at the Eesti Trüki- ja Paberimuuseum (Estonian Printing and Paper Museum). I'm over the moon to have been selected for a three month residency in the university town of Tartu, Estonia. Not only do I get to explore the archaic printing presses in this working museum, this small Baltic nation is the world capital of female werewolves. Does it get any better? To read all about my adventures, click on blog posts #1,  #2 and #3 on the TAiR website. 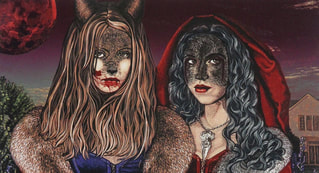 ​My first solo exhibition in Tasmania, Blood Moon features a roll call of female werewolves from throughout the centuries, spanning early modern werewolf trials, hirsute wonders, furry femme fatales and the recent generation of cinematic PMS werewolves. Proudly part of the Stranger With My Face International Film Festival, directed by Briony Kidd with a focus on female filmmakers in the horror genre. 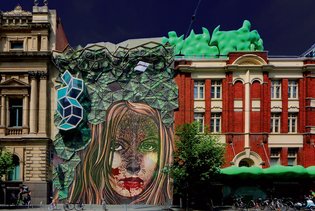 ​As the sun sets and Melbourne lights up for White Night, the façade of RMIT Storey Hall annex will be transformed into a giant billboard of morphing female werewolves. With enormous, billboard-scale gratitude for this opportunity to show my work in a new light - literally - and to assisting filmmaker Ollie Clifton for helping me make the most of this opportunity. Official details viewable here, and some beautiful footage of the night  by Ollie here. 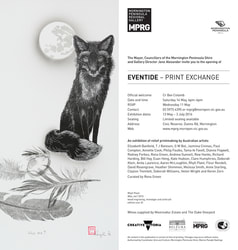 29 June - 18 July  2016: Solo exhibition
Where the wolfsbane blooms, The Art Vault, Mildura
​
To co-incide with my forthcoming residency at the fabulous The Art Vault, I'll also be exhibiting a selection of works from my PhD project and beyond that return attention to archaic lore in which enchanted flora or potions brewed from poisonous flowers caused women to transform into wolves. Explanatory wall texts provide insights into the floral iconography in an exhibition that exploits and subverts the cliché of the quintessentially feminine floral motif.Be sure to pop in if you happen to be passing through Mildura 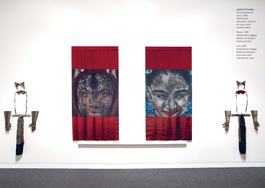 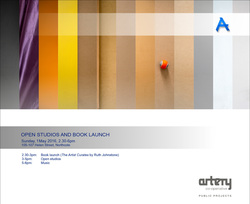 1 May 2016 Artery Open Studios, Book Launch and After Party ​, Artery Northcote
​
Hear Jazmina Cininas talk about her chapter on the Artery studios for the book, The Artist Curates, visit Jazmina's studio in the Artery studio complex and listen to Jazmina as she sings with her Lithuanian folksinging group, The Lost Clog. 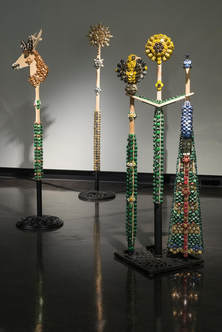 Domenica Vavala has curated a shimmering exhibition exploring the enduring power of storytelling, symbolism and myth in contemporary visual art. I'm honoured to have been invited to give the opening remarks at the exhibition launch, and excited to be showing my totemic lagerphones in the show as well amongst such excellent company. Fellow artists include Eddy Carroll, Paul Compton, Deborah Klein, Minela Krupić, Alesh Macak, Annette Phillips, Dear Plastic, Carmel Seymour, Linda Studená and the lovely Domenica herself.
​ 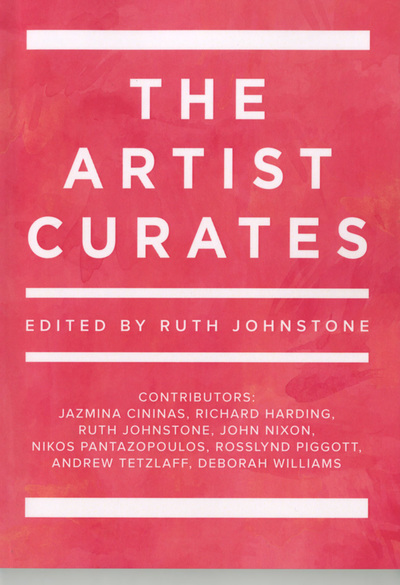 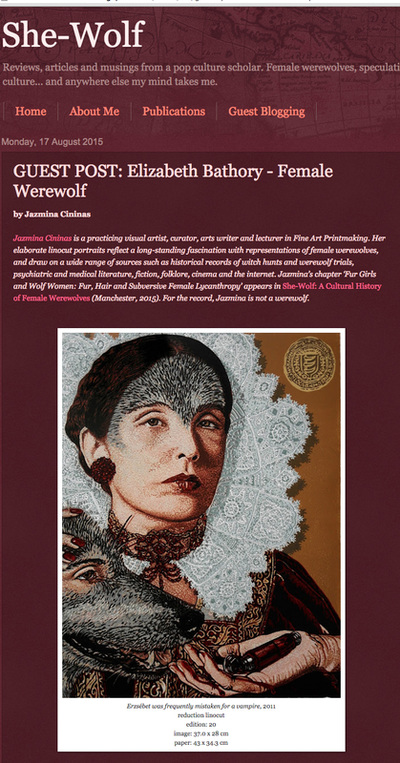 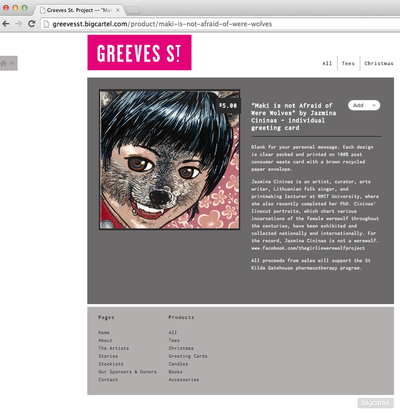 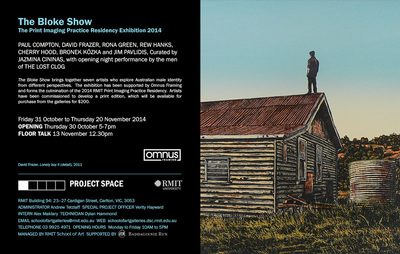 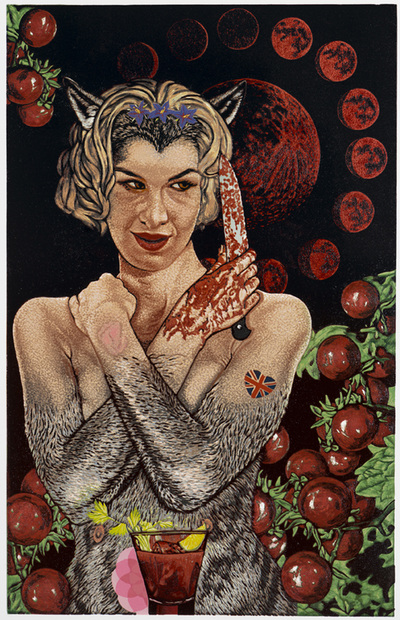 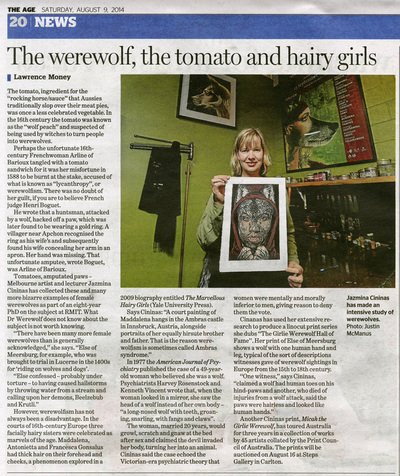